Dominic From Luton has secured himself a substantial reputation as an innovative artist whose practice takes unexpected twists and turns. At the core of his practice is an intriguing and fascinating relationship with his home town of Luton.

English Man Going Insane is Dominic from Luton’s visual love letter to his home town. Uniting the anarchic energy of British contemporary art with a view of the world honed in Luton. It is a journey from the 1970s to the present, a tragi-comic personal history which re-visits some of the most spectacular moments on Dominic’s often contradictory journey from small town boy (and fanatical Luton Town supporter) to the global art superstar we know and love today!

Treating the storefront as the major art museum it will eventually become, English Man Going Insane might be described as a mid-career retrospective with some new work and some new interpretations of existing work.

Central to the enterprise will be a ‘boys own’ homage to the glorious day in April 1988 when Luton Town beat Arsenal at Wembley to win the League Cup.

It will also revisit Sunridge Avenue Projects, when Dominic took the opportunity presented by an Arts Council grant to exhibit the work of top international artists at his parents’ otherwise unremarkable Luton Semi. What modern visitors to Sunridge Avenue may overlook, as a peculiar and disembodied section of wall in the front garden of number 32, is actually an original work by Turner Prize winning artist Martin Creed. The process of commissioning and producing the Sunridge Avenue project will feature heavily in Dominic’s new exhibition English Man Going Insane. 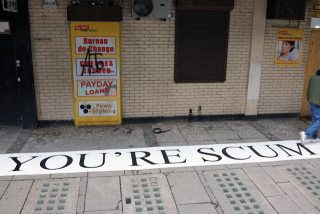 As You Change So Do I invite you to attend the opening reception of English Man Going Insane.

Dominic From Luton will be in conversation with Curator Matthew Shaul, there will be a special opening for this event, all welcome admission free.