J. Hackson, curator, posed the question: ‘if Luton had fallen asleep in 1969 and woken up 1980, how would we summarise the curious dream that happened in between…?’ in an attempt to make sense of the charmingly uncomplicated mix of optimism and pessimism which we now associate with the ‘Super Seventies.’

Bringing enormous changes to a town that, until then had grown according to the needs of industry and had been patterned by waves of immigration, the decade saw the dismantling and reconstruction of the town centre with the arrival of the Arndale Centre, Luton’s victory on the comedy game show It’s a Knockout and a brief second spell in football’s top-flight for Luton Town FC.

The 1970s both sounded and looked strange. To modern eyes the clothes, cars, and domestic interiors are at turns remarkably old fashioned and surprisingly contemporary but always out of this world. Throughout March and April the Storefront will become a showcase for the bold, garish, misaligned culture of the period and an opportunity to debate its legacy.

Find out about submissions and how to get involved

Lutonians (and others) are invited by J. Hackson and the Storefront to contribute their photographs, fashions and other 1970s memorabilia to contribute to a display that will morph and change throughout the project. 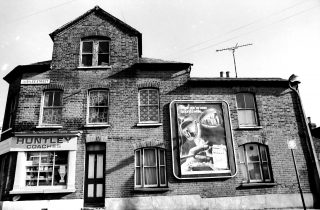 ‘The 1970s Were Here’ is organised by Departure Lounge in collaboration with Luton Culture as part of ‘As You Change, So Do I’.