Billboards was a 2 year curated programme of newly commissioned temporary large-scale artworks in the form of billboard posters, murals  and events at specific sites around Luton town centre. The position of each intervention was chosen for its footfall and excellent engagement with local people and visitors. This strand promoted the project themes around local stories of our people, our super-diverse contemporary culture, imagery, heritage and traditions. Several project emerged from this strand including;

‘Keep the Home Fires Burning’ was a celebration of Luton’s working population and created a film which will be shown at Bute Street Film Festival 2019.

Participation – Scott King worked with Barnfield Collage students to create banners signs for a crowd welcoming commuters.  For the film there was also a street party to send off and welcome home commuters on Thursday 29 September 2016. Three hundred and fifty people engaged with the event at which local performers such as the Luton Youth Cantores and Incognito Gospel Choirs as well as a solo violinist from Sinfonia Verdi performed.

‘ANY DREAM WILL DO” By Polly Apfelbaum

A series of new poster-works was produced exclusively for Luton town centre (Luton Station). A large billboard poster was positioned outside of Luton’s central railway station, while three other smaller works – Pataphysical Dog, A is for Animals and Celtic Animal Zodiac –were produced in an unlimited edition to be taken away and reposted around Luton by visitors to the cultural quarter. In addition, a limited print, in the form of a felt calendar for 2017 titled Pink Giraffe, was produced for the project in collaboration with Luton’s Guildford Street Press.

Participation – Andrew Hunt gave a talk to a group of 54 people about this International Artist and her work.

Yuri took Luton’s airport, the fourth busiest travel hub in the UK, as his subject matter to dwell on the town’s industrial infrastructure within a global economic context. The artist  created an installation with  recording devises that were fixed in a room at the EasyHotel on Bute Street with a direct view of departing flights in order to track the airport’s activity in real-time.   He has also created 40 boxed works of photographs for sale.  Yuri agreed to do this project shortly prior to winning the prestigious Frieze Artist Award.

Participation – Through website created and discussing work at the Hat factory when the work was launched, one of the emerging artists from Space especially interested in meeting him and learning about his work.

This project engaged 25 local people to reconstruct Henry Moore’s famous series of sculptures ‘Mother and Child’. This project resulted in a series of projected images of families from the local community, which was shown in December 2016 on the Culture Wall. (survey comment:–“Really loving the projections on the building”).

Participation – 25 local people enjoyed working with the photographer to create work projected on a large scale on the Culture Wall.

THE LUTON HOST by Jeffrey Dennis

A mural in Bute Street, starting with a pattern derived from designs by William Morris.

Participation – Jeffrey developed the work throughout the summer, engaging with local people and also inviting people to contribute to The Luton Host, in advertised workshops and just people who happened to be in the area, which resulted in some spontaneous results.  At the opening of the work Jeffery introduced Matthew Sawyer an experiment folk guitarist. 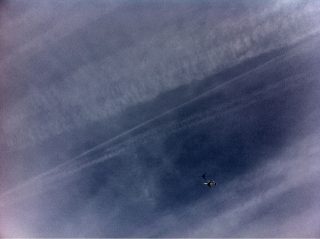