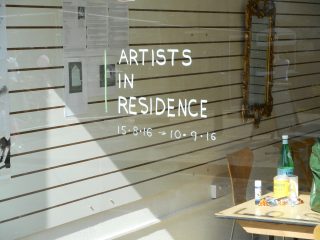 Artists given the opportunity have a residency in an empty shop and to carry out a workshop with a Luton Artists Group.

The High Town area offered  an exciting opportunity to explore the potential for using empty spaces to develop and nurture independent artistic enterprise, improve the street scene and build on the existing distinctiveness and character. High Town Arts for All have extensive links with communities, artists and organisations within the area and have a successful track record in using empty shops for arts and culture based enterprises and residencies most notably the High Hats – hat shop and the Flamingo Arts workshop space for creativity.

Space  was open to returning arts graduates from Luton develop their work, share ideas within the public realm and with local and national groups that connect creativity through issues around positive mental health and wellbeing. There was a collaboration with the Open Arts Group who already engage with individual and groups with mental health issues. Each year delivered a new aspect of the project;

Offered 4 residency opportunities to local Luton based emerging artists in an empty shop on the Hightown Rd.  Artists also did 4 workshops with the Open Arts Group in the Flamingo Arts shop for a month, they have also created work to be projected on Culture Wall.  One of the group, Stephen Whiting, used this experience to progress to Testbeds.   (evaluation comment from Stephen Whiting: I believe the project was successful in its aim at developing  the artists’ practice within the Luton artistic community and raising awareness of Arts activity in the locality”)

Curated by Luton Open Arts ,an empty shop in High Town was used as a space for emerging Artists to develop their practice,  Illustrator Darrel Innes,  Photographer Jamie Newell and visual Artists Grace Woodcock.  There was a film maker, but he was called away onto a shoot at the last minute, (he showed his short film on the commission wall). All the Artists carried out workshops and  Alva carried out a workshop on feltmaking  (as a substitute for the film maker).   The project culminated on 1st July for the High Town Festival a celebration of local culture in the street. On 28th June the Artists met Mark Titchner and they were also invited to openings including ‘New commissions in Summer’

Curated by Caroline Wallace, Storefront was used again as a space for local Artists to develop their practice, each were given a week and carried out an event in the gallery and workshop.  Space had television coverage from BBC News and Pakistani News which boosted attendance and was a good experience for the Artists involved.  Luton Bid and Luton Borough Council were also pleased about the positive publicity. 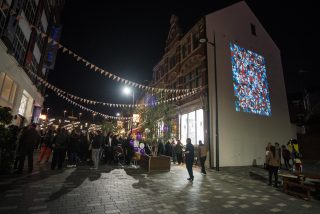