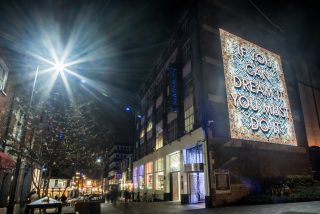 A striking illuminated work for the gable end wall of The Hat Factory Arts Centre which has become a visible beacon and recognisable icon for Luton.

In December 2016, Mark Titchner, the lead artist for ‘As You Change, So Do I’ installed a major new public work in Luton town centre. A monumental light box titled Beacon (2016) now occupies the gable end wall of The Hat Factory Arts Centre facing the approach from Luton’s central railway station. Utilising one of the artist’s trademark texts, commuters, local people and visitors are greeted by the message ‘If you can dream it, you must do it’.

Participation – The public was encouraged to take Mark Titchners work as an inspiration for their version.  If you can dream it, you must do it ‘ was written in some of the many different languages spoken by Luton people, in many ways.

The project developed into 2 further opportunities to engage the public;

In partnership with Sedition, Lead Artist, Mark Titchner produced a hypnotic new video artwork. The new work, ‘If You Can Dream It, You Must Do It’ is available as a free edition from www.seditionart.com.

Participation – Anyone could view the work on the LED screen in Connors Café at the  digital artwork was displayed for a month, beer mats were produced to help publicise this throughout the town. We estimate that about 8500 people walked past the artwork in Connors Café.

These words  have been translated by Google Translate and  art worked into large scale posters that are displayed along temporary hoardings on Bute Street.

Participation – Mark Titchner carried out a workshop with Barnfield College Art and Design students who created work which were displayed alongside Marks work.  Interestingly the translations have instigated much public response and debate about grammatical mistakes and linguistic inconsistencies that have resulted from computer generated translations. Social media comment said of the work,“There are so many Polish people in Luton, So what was the reason to use google translate? Come you guys?” [sic]

Mark Titchner was born in 1973 in Luton and studied at Central St Martins College of Art and Design. His work involves an exploration of the tensions between the different belief systems that inform our society, be they religious, scientific or political. He works across a number of media including digital print, wall drawing, video, performance, sculpture and in his installations he often employs motifs taken from advertising, religious iconography, club flyers, trade union banners and political propaganda. The common denominator among this material is a quest for idealism and enlightenment; a desire for some form of transcendence. He has exhibited extensively internationally, was nominated for the Turner Prize in 2006 and participated in the 52nd Venice Biennale in 2007. Over recent years his practice has focused on the production of public works including permanent works in London, Manchester, Toronto and Warwick. Titchner’s works are held in many permanent art collections, including Tate; Arts Council Collection; British Council Collection; The City of London; Government Art Collection, and South London Gallery. 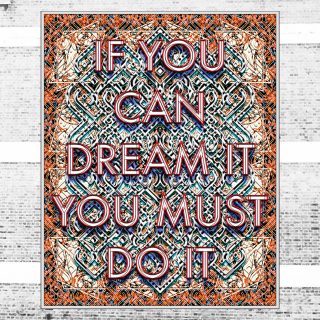 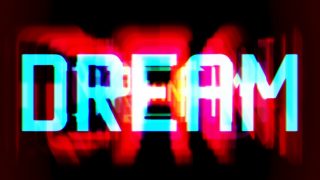 ‘If You Can Dream It, You Must Do It’
For the launch of ‘As You Change, So Do I’, Mark Titchner will produce a hypnotic new video in partnership with the contemporary artists’ multiple agency Sedition, which will be available for free as a downloadable art edition.