The festivities began early on with the sounds of Sarah Thornett, from Sinfonia Verdi, at the railway station – the first part of artist Scott King’s ‘Keep The Home Fires Burning’ – sending off and welcoming commuters. Sarah’s violin lifted spirits and invited all to join the launch on Bute Street whilst families bore banners to bring the heroes home.

Further musical performances from Luton Youth Cantores and Britain’s Got Talent’s Gospel Incognito were outside The Hat Factory Arts Centre beneath the bunting whilst Mark Titchner’s free digital artwork, ‘If You Can Dream It, You Must Do It’ rolled hypnotically on screens in the window of Connors Café Bar, illuminating the street. 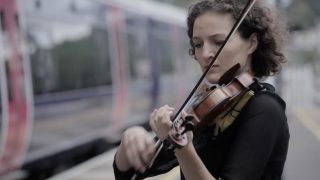 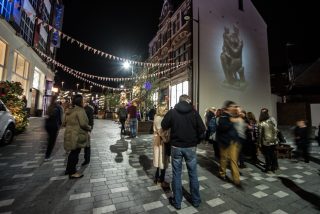 ‘AWEARNESS Luton‘ occupied the Storefront, exhibiting t-shirts designed by locals revealing their thoughts on Luton – both positive and negative. Artist Susan A. Barnett flew in from New York to be at the launch and will photograph the designers in their respective t-shirts in iconic locations around Luton, creating a mosaic of opinions to be projected onto the Culture Wall.

The spectacular evening of merriment was closed with the unveiling of the Culture Wall itself; the first projection saw Henry Moore’s famous sculpture, ‘Mother and Child’ – the prelude to Scott King’s second project ‘Mother and Child (Luton)’, in which local families will be photographed to demonstrate the diversity of motherhood and the unique harmony that exists in Luton.

All three artists, Mark Titchner, Susan A. Barnett, and Scott King, gave an insight into their projects, accompanied by speeches from curators Matthew Shaul and Andrew Hunt. The projects will run for the next three months in the Cultural Quarter. 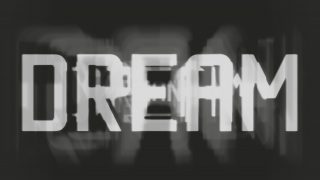 Mark Titchner partners with Sedition
Mark Titchner, the lead artist for ‘As You Change, So Do I’ has partnered with the contemporary artists’ multiple agency Sedition to produce an exclusive free digital artw 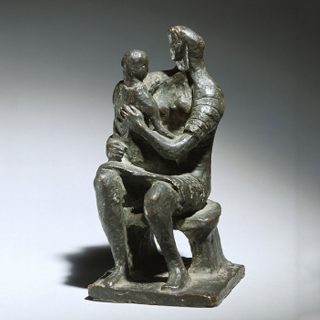 Be photographed for ‘Mother and Child (Luton)’
Scott King will involve local people to reconstruct Henry Moore’s famous series of sculptures 'Mother and Child', works that were made during the 1920s through to the 1960s, and which became a staple for civic public sculpture during the post-war era in the UK.